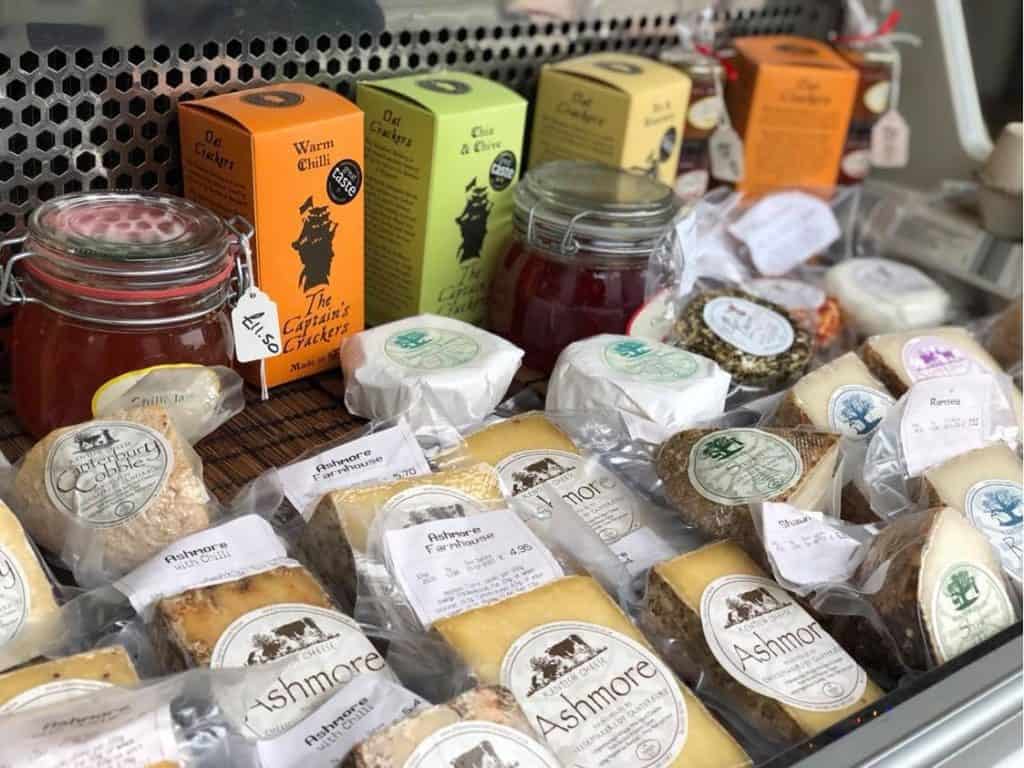 Advice on selecting your cheeses this Christmas from the Cheesemakers of Canterbury.

Don’t be a scrooge with your cheese!

What made Scrooge such a mean-minded skinflint? Probably the appalling lack of choice in Christmas cheeses!  In all his thousands of pages and hundreds of descriptions of mouth-watering feasts, Charles Dickens only mentions a handful of cheeses.

Stilton? Don’t even mention it. For Dickens, Stilton was a crumbling cliff writhing with maggots! Cheddar? The word never appears – not even once, in all his works. Cheshire is his most mentioned, with seven references. Gloucester gets six, as does Stilton – but then again even cheese mites get two.

But bring Scrooge to Cheesemakers of Canterbury’s counter today and he’d be chortling with the best of them. We stock over 50 different cheeses from the British Isles, some dating way back, but so many more that are only 20 years old or even less

What with one thing and another, this is going to be a different kind of Christmas. Numbers round the table may vary, and so too will supplies.

Cheese production is down this year – order early!

Colston Bassett, makers of the finest fresh Stilton, had to guess in September if they would have a market in December, and make accordingly. They chose to cut production by 20% – and to even achieve that they had to abandon the production of their other cheese, Shropshire Blue.  Makers of young soft cheeses have had to take similar gambles. So, reserve your cheeses as soon as possible.

The first law of choosing a cheeseboard is to limit the choice. Don’t make the mistake of splitting your budget between 12 cheeses, you’ll be offering amounts so small that one person could easily take the whole wedge of anyone offering.

Keep it to a hard, a semi hard, a soft, a blue, and one extravagant indulgence.

Hard cheese: if it’s rich and righteous it will be rinded. Cheeses naturally grow a rind. Those that don’t have been wrapped in plastic to maintain moisture (and therefore weight). Babyishly bland, they’re not worth the bother.

For a hard cheese we have Somerset goudas, Kentish goat and sheep (Kelly’s and Ramsey) and our own award-winning Ashmore Farmhouse (six months) and Ashmore Ancient (12 months), plus Isle of Mull, Winterdale Shaw and others.

Choose a cheddar that stands up to you and talks back. You need it pretty forthright, but temper that with a glass of sweet dessert wine – it’s that milk and honey balance that leads you on into the land of plenty.

In soft white rinded cheeses it is on the rind that all the magic takes place to create their flavours. To discard the rind is like having the tonic without the gin. Try a classic brie like our Bowyer’s, or something richer, like Waterloo, made with Jersey milk, and described by one customer as “not a cheese, more like a hollandaise sauce wrapped in a rind.”

Blue cheeses come soft and creamy with hints of brie, like Cotye Hill, strong and crumbly, like Kentish Blue, or that Colston Bassett Stilton, mellow and gentle enough to spread on a roll for breakfast.

Semi-hards range far and wide in flavour and texture, Sharpham Rustic, shaped like a white flying saucer, is another Jersey milk marvel, sweet enough for children, but with enough bite to keep the adults interested.

Rachel is a slightly soft goat, clean, fresh, but with the tang of a strong sea breeze.

Gorwydd Caerphilly is creamy and lemony, ripening around the rind – and a million miles away from the lump of chalk passed off as Caerphilly by the mass producers.

Goat’s milk cheeses in Britain today are vibrant and citrusy when young. They whet the appetite at the start of a meal and freshen the palate at the end.

Sheep’s milk cheeses are sweet and cuddly, wrapping woolly arms around you for a hug. As one who knows how viciously ungrateful sheep with appalling personal hygiene habits can become foot rotting time, that is some admission…

If you want to throw in a conversation stopper have a look at our oak-smoked Stilton and Bowyer’s Brie. Or be subversive and slip in a wedge of Ribblesdale Blue, the silkiest, suavest, most elegant blue around – just don’t let on it’s a goat’s cheese. See how it goes down!

There’s your cheese. These are made by people intent on quality, not profit margins. Taste is everything and amounts don’t need to be that big.

Remember to take them out of the fridge before you start your meal and their flavours and textures will bloom and blossom.